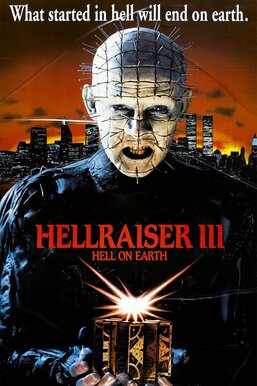 After learning in "Hellraiser II" that he used to be British air force Capt. Elliot Spencer (Doug Bradley) -- before he was sucked into another dimension and turned into the pain-craving creature known as Pinhead -- Spencer's soul ends up in limbo. Meanwhile, Pinhead is sealed in a column, which is bought by J.P. Monroe (Kevin Bernhardt). In a dream, reporter Joey Summerskill (Terry Farrell) learns from Spencer she must reunite his two halves to send the murderous Pinhead back to his world.