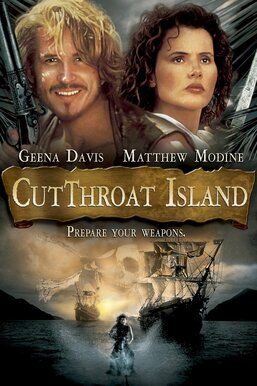 Feisty Morgan Adams (Geena Davis) inherits her late buccaneer father's galleon and one-third of a map to buried treasure located on Cutthroat Island. The map had been tattooed on her father's scalp, and to find the treasure, she must locate and scalp his two brothers. But Morgan's swashbuckling uncle, Dawg Brown (Frank Langella), wants the treasure for himself, and does battle with his headstrong niece and her unwilling accomplice, Latin-speaking physician William Shaw (Matthew Modine).