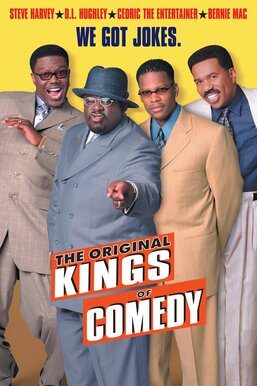 A cultural phenomenon for our time: Spike Lee captures the comic geniuses behind the successful "Kings of Comedy" tour. In the concert feature film "The Original Kings of Comedy," acclaimed director Spike Lee brings his aesthetic sensibility and distinct style to the comedy concert film genre, as he documents the individual talents of Steve Harvey, D.L. Hughley, Cedric The Entertainer, and Bernie Mac and reveals the behind the scenes activities of a tour that continues to sell out arenas.