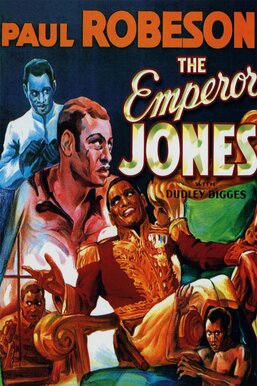 A black congregation prays for the wily and ambitious Brutus Jones (Paul Robeson), who is off to work on the railway. Jones is conscripted to a chain gang after killing a fellow gambler, and escapes by clubbing a guard. On the run, he gets a job shoveling coal on a ship in the Caribbean, and jumps off when they pass an island. When he is captured by the natives, his freedom is bought by a white trader (Dudley Digges). Jones tricks the tribe and becomes emperor, but is outrun by his own magic.