A man (James Stewart) tracks his prize repeating-rifle back around to the man who stole it. 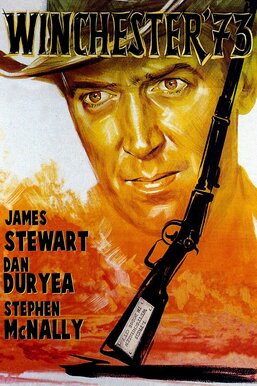 Lin McAdam (James Stewart) pursues notorious outlaw Henry "Dutch" Brown (Millard Mitchell) into Dodge City, Kansas. There, in an effort to flush out the criminal, McAdam enters a sharp-shooting contest and wins the top prize: the eponymous Winchester rifle. Brown, desiring the rifle for himself, sneaks into McAdam's room and makes off with it. After finding the rifle missing, McAdam chases Brown across the state and toward an epic confrontation.