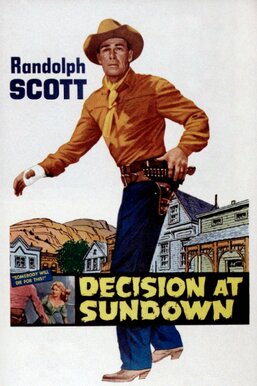 Hell-bent on revenge, flinty gunslinger Bart Allison (Randolph Scott) rides into a sleepy Western town with one goal in mind: to kill local roughneck Tate Kimbrough (John Carroll), who kidnapped his wife years ago. Both men have blood on their hands over the woman's eventual suicide. Allison and Kimbrough, wracked with guilt but boiling over with bloodlust, are set to face off for one final confrontation. Tensions mount as sunset approaches, and the townspeople must choose sides.