A Victorian (David Niven) bets that he can circle the globe in 80 days. 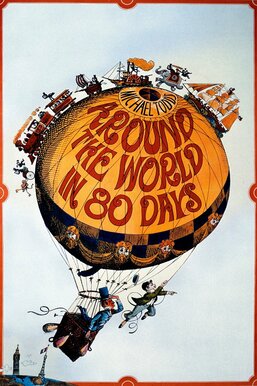 Victorian-era Englishman Phileas Fogg (David Niven) proclaims before his fellow members of a London gentleman's club that he can circumnavigate the globe in a mere 80 days, further boasting that he will bet the princely sum of 20,000 pounds on the success of his endeavor. With his stalwart manservant Passepartout (Cantinflas) alongside, he goes forth on his adventure, pursued by a dogged Police Inspector (Robert Newton) who suspects Fogg of chicanery.