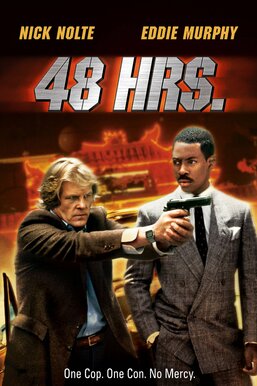 Renegade cop Jack Cates (Nick Nolte) pulls bank robber Reggie Hammond (Eddie Murphy) from a federal prison on a 48-hour leave to help him capture Hammond's old partner, Albert Ganz (James Remar). Having escaped from a prison work crew, Ganz is on a killing spree around San Francisco, on the trail of half a million dollars that went missing after one of his robberies. The cocky Reggie knows where the money is, but spars with the hotheaded Jack as he enjoys his temporary freedom.